To manage on Indian mean wage

This is a short version of the Swedish text To manage on Indian mean wage.

I was planning to write regularly here, maybe about India. That did not happen, although there is much to write about a country that is the world's largest democracy, has the second largest population, is multicultural with more than 60 languages and several religions, winters with meter high snow in the north and tropical heat in the south, mega town and an enormous countryside population, luxure and slums side by side, and a long long history. India is the most different country I know.

Since I finished The Bhopal Saga, I'm no longer an activist, nor author. All the same, I am not allowed to enter India, to visit my eight grandchildren. I have become 70 - I hope to spend my 71st birthday with  my Bhopali family. So to some extent, I follow what is happening in India.

From a friend I received a link to the the article about Matt and Tushar, two students who tried to live at 150 and 26 rs per day, respectively - the average income and the poverty limit for villagers. In their blog they describe how they managed - or not managed - nutriate themselves on this small money.

I think it is marvellous, that in such a diversified, chaotic country as India, a general strike can be organised. Thank you, Gandhi, who taught this huge population that peaceful demonstrations can change the world.

Here is a picture I found in my files, showing how an American and some Indians are valued. 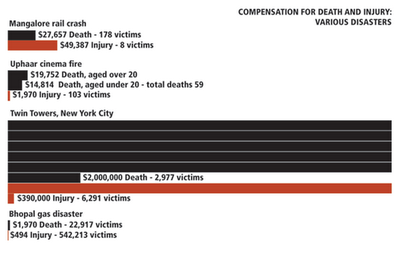 I don't need to go to India to write naughty articles about India - as an Indian does not have to go to Sweden to write naughty articles about Sweden. It's not lack of material that keeps me from doing it. No, I have other prioritations, as those who understand Swedish know. I am not a journalist, and I am not fighting for the rights of poor people in India. Other people are doing that much better than I ever could. Now and then I open these websites, realising that the content is about the same, year after year.