Below is material copied from my static website, that is not possible to update. You find articles etc. in my CV.

A 7-part podcast series that tells the story of the Bhopal Gas Tragedy and what it means to survive a disaster. I contribute to episode 2 and later.  Website   Google   Spotify   Apple

Book: Ethics of Chemistry - from poison gas to climate engineering (2021)

My contribution to this book is chapter 5: Corporate and governmental responsibilities for preventing chemical disasters: Lessons from Bhopal.  Videoadvertisment   Reviews   Flyer

Home
Om mig - about me
Folkmusik

During the night Dec 2-3, 1984, large amounts of water entered a tank containing 43 tonnes of Methyl isocyanate (MIC) in Union Carbide's plant in Bhopal, India. A strong chemical reaction started and a big cloud of toxic gases spread over the sleeping town. 500,000 people were exposed to the gases. 8,000 died within the first week, and 8,000 since. 100,000 have permanent injuries.

Today, Dow Chemical has taken over Union Carbide Corporation. The survivors fight for their right to full economic compensation and medical care. Together with other residents, they fight for Dow and the Government of India to clean up the polluted area and the ground water.

AM I A SAFETY RISK?
Since September 29, 2008, I have had difficulties to get visa. These problems seemed to be over - but in spite of my visa, I was not allowed to enter India in January 2011! Instead I was sent back to Sweden. Is it a crime for foreigners to support human rights in India? Please make comments in my blog!

When my "granddaughter" was going to marry in October 2015, the ambassador obtained permission for me to go to Bhopal "for strict private reasons". I missed the wedding but spent three marvellous December weeks with her and her relatives in Bhopal - first visit for nearly six years! Of course, I also visited my friends at Sambhavna and Chingari Trust. It might be a one time event - I don't know what will happen next time I apply for visa.

MY BLOGTEXTS ABOUT BHOPAL
(in Swedish and English) are found here. 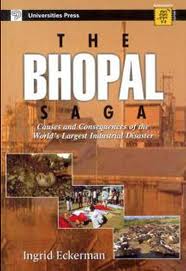 The Bhopal Saga - the only book I have ever written. 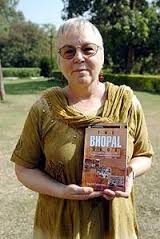 In December 2004, this picture was on the first page of a large Indian paper.

This is the book I published in India on time for the 20th anniversary of the Bhopal Gas Leak in 1984. Since I was in Bhopal for the first time, as a member of the International Medical Commission on Bhopal 1994, I have collected all material that I could find. The list of references contains more than 200 items.

The Bhopal Saga contains little new information that has not been published before. But the material is structured, systematized and analysed. It covers the period from the Green Revolution during the 60s until 2003.

I show that the figure for immediate deaths should be more than 8,000 people. The official figure is 4,000. I also show the whole range of diseases and symptoms that has hit the survivors, as well as the insufficient support from the Governments and Union Carbide.

My analysis shows that the causes of the leakage were the design of the plant and the economic pressure. The parties responsible for the magnitude of the disaster are Union Carbide Corporation and the Governments of India and Madhya Pradesh.The publisher is Universities Press (India) Private Ltd, Hyderabad. The book's royalty goes to Sambhavna Clinic.

LIBRARIES
The Bhopal Saga is also found at some university libraries in USA, GB and Sweden.
In Bhopal, it is donated to Gandhi Medical College.

READ MORE
"Chemical Industry and Public Health - Bhopal as an example" is the title of my essay in MPH 2001. It is a shorter version of The Bhopal Saga (58 pages, 82 references).
Read the essay here.

"The Bhopal gas leak: Analyses of causes and consequences by three different models. Journal of Loss Prevention in the process industry 2005:18;213-217.
Read the abstract here. Read the text here.

"The Bhopal disaster 1984 - working conditions and the role of the trade unions" in Asian-Pacific newsletter on occupational health and safety, 2006:13(2);48-49. Read the article here.

Corporate and governmental responsibilities for preventing chemical disasters: Lessons from Bhopal. HYLE--International Journal for Philosophy of Chemistry, Vol. 24, No. 1 (2018), pp. 29-53.

The Bhopal People's Health and Documentation Center. Here allopathic (western) medicine as well as Ayurvedic (traditional Indian) medicine and Yoga are offered to the victims. The clinic is financed by private contributions, mainly from the USA and Great Britain. It started on a very small scale but is steadily expanding. The new building was inaugurated in april, 2005.

Read "The Architecture of Healing", an article about the new buildings.

Sambhavna is supported by the Swedish Doctors for the Environment (LfM) www.lakareformiljon.se.

Economic contributions can be made on www.bhopal.org.

Since 2005, disabled children to affected parents or living in the waterpolluted area, get treatment here. Support is also given to poor women.

Economic contributions can be made on www.chingaritrust.in.

www.bhopal2011.in The website from the conference about how to make the plant site to a memorial site. Order the memorial book!

www.bhopal.net  The official website of the International Campaign for Justice in Bhopal. It's the authoritative resource for Bhopal information, and contains the latest updates and events from around the world.

www.bhopal.org  The official website of the Sambhavna clinic in Bhopal.

www.studentsforbhopal.org  American students are active in the fight for the Bhopal survivors. Lots of information is available here.

Wikipedia about Bhopal disaster  Here are a lot of facts about the catastrophe as well as links and recommended literature. The version from July 30, 2012 contains more reference material than the current version.

Wikipedia about IMCB  Here is information on the International Medical Commission on Bhopal, 1994.

www.bhopal.com  The official website of Union Carbide and Dow Chemical.

Bhopal - a prayer for rain  Released 2014. A good documentary.